Jumpin’ On The Bandwagon (CD) 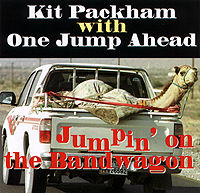 Released on Tuesday 10th April 2001 at Oxford Street’s famous 100 Club, the albums 13 tracks were all written by Packham and the band’s then guitarist Billy Jenkins. This was the first time that the band released an album of entirely self-penned material.

We’re harnessing historical popular music styles to create new material using the familiarity of classic genres as a vehicle to express our own feelings about life in the new millennium. The inspirations mainly come from the Jazz or Blues archives – but there’s calypso, pub rock and even some Noel Coward in there!

Humorous blues lyrics don’t come any better – cleverer or funnier – nowadays than those from Kit Packham’s pen, and there are two or three new examples here which are as good as anything I’ve heard from him before. “We Don’t Normally Work This Cheap” in particular is exceptionally witty, and actually had me laughing out loud the first time I heard it. “Cleaning Up My Act” too, is as amusing a piece of 1920s-style-jazz-vaudeville as you’ll hear this side of the Bonzos.

Anyone expecting this surfeit of good humour to equate with a lack of musical seriousness would be wildly mistaken, since Packham’s comedy sits upon a bedrock of real jump’n’jive know-how and instrumental earnestness – this is a band, after all, which even gives a “beats-per-minute” reading beside each track title. Personnel-wise, the band is not greatly changed from that which appeared on 1999’s From Top to Toe, with Billy Jenkins again displaying the subtler side of his guitar range and tastefully producing throughout. Also worthy of mention here are the keyboard skills of Perry White, Simon Da Silva’s trumpet work, and the fine rhythm backline of Chris Rodel (double bass) and Kenrick Rowe (drums). Sax duties are shared between Tracey Mendham and Kit himself.

The songs, all originals this time, display a wide range of influences, not just the blues, jazz and jive tunes Packham praises in his amusingly honest sleeve note, but also Caribbean and Latin American music. The band switch styles and tempos with ease, and although Kit is not the greatest singer on the block, he plays the “personality vocalist” card with some aplomb. All things considered it’s a very impressive set.

I confess that I haven’t checked, but with this CD, I’m pretty sure I now have the first reference to David Beckham’s haircut in my collection! Singer and saxophonist Kit Packham inhabits a nightmare world where clouds follow him around just to rain on him, his cat disappears under mountains of junk mail, maniac truckers rule the roads and only leave the cab “for diesel, the toilet or a doner kebab”, his mobile phone never works and, when he does get to play a gig, he finds that “a big screen above us plays an old cup final, the dressing room doubles as the men’s urinal” – welcome to the third millennium! As you may have guessed then, all the material is original – very original at times – if occasionally just a little too wordy (but these songs do stay in your head long after the album has ended).

Much of the music is jump or jive, owing a lot to the likes of Louis (take your pick – Jordan, Prima, even a snatch of Satch) but often with its own little musical twists, most often provided by guitarist Billy Jenkins, a well-known innovator on the UK jazz and blues scenes, whose solos and fills are kind of, er, Jimi Hendrix plays Tiny Grimes as imagined by Vernon Reid of Living Color. Drummer Kenrick Rowe also deserves a mention for being totally on the ball, though there are no slackers here. There are a couple of Caribbean styled pieces in “Fried Bananas” (cod Louis Jordan plays cod calypso) and the mellow “Simple Things In Life”, “Junk Mail” is almost Little Richard style, “Rough and Ready Blues” is virtually that, and the final number is a lyrically very clever and up to the minute song with a twenties jazz accompaniment and delivery. Oh, and “Big Swinging Dick” is about “a long-legged sleuth with a sideline in syncopation” – why, what did you think it was?

Yeah, this is nice. If you like your jump-jivers note for note from old 78s, avoid this like the plague; otherwise, if what you have read here has piqued your interest, check it out by all means…. And by the way, don’t take the title too literally. Kit has been purveying this brand of music around South London and environs for well over twenty years now.

This is Packham’s best album to date. All originals from the leader with help from guitarist Billy Jenkins and arranged within a framework of jump, jive and boogie.

The band (One Jump Ahead) play like a well-oiled machine but not like clockwork. There’s loose rhythmic feel and the vibrant happy sound of people enjoying themselves. Packham and Jenkins supply some quality tunes including a number that will strike a chord with many bands (We Don’t Normally Work This Cheap). The lyrics cover all the deflating experiences of a struggling band and even established ones no doubt. The Big Swinging Dick is obviously about a private eye with rhythm and is a good rousing number to boot!

A good mixture of serious blues and tongue-in-cheek numbers that could make a party swing.

……..Once again Kit Packham and One Jump Ahead have come up with a highly entertaining album….. As always, the music from this big swinging outfit is superb and such is the range – everything from Chicago blues to boogie-woogie, jumpin’ jive and and good time singalong – that this CD is a complete show in itself…….

From BLUES IN BRITAIN... Kit Packham’s latest CD offers a fine selection of jump-jive tunes with some amusing and topical lyrics. Apart from a cover of Louis Jordan’s “Ain’t Nobody Here But Us Chickens” all the numbers come from within the band, Kit writing five, trumpeter Simon Da Silva and keyboardist Perry White two each, with sax player Tracey Mendham, guitarist Steve Knight and bassist Olly Blanchflower one each. Kit plays sax and sings most of the songs, with Tracey and Perry stepping up to the mike once each. More Info »
Price: £7.00
2014-04-03T12:26 by Kit Packham 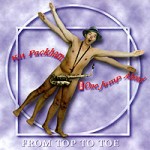 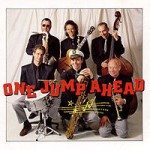